The first time I met Harry, I was totally intimidated by him. I see some people share the experience. It was 1982, and he was standing outside Playwrights Horizons all dressed in black looking sleek and chic and like someone who knew he was destined to be a major force in the universe. I was already in love with his work as a playwright. About six months later, Carole Rothman and I asked him to write a companion piece to his one act play The Fairy Garden to help launch our first season at the Second Stage’s new home on W. 76th Street. Linda Her was born. Throughout production Harry proved true to his reputation. Brilliant, meticulous, demanding, he was involved in every detail right down to the poster. Quaking staff members would deliver his every request. He even forced us to fire the very first actor we had ever fired — an eight-year-old girl -­with a simple “She just can’t cut it.”

Sometime during the run of Linda Her and The Fairy Garden, I took Harry to lunch at Fine and Shapiro Deli (which later I saw as a major faux pas, considering his culinary sophistication) and as if possessed by karmic longings, I said, “Harry, I want…no, I insist on being your friend.” He looked down his nose at me inquisitively and, gnawing on his third pickle, said, “Alright.” 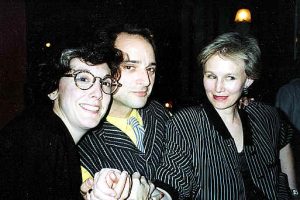 Robyn and Harry with Brenda Currin

And I welcomed Harry Kondoleon the artist, the satirist, the chef, the clotheshorse, the Boisterous Nut, the Crabby Old Man, and sweet sweet friend into my life. Immediately we found a language together that was silly, exclusive, and, I’m told by someone close to me, sometimes obnoxious. We laughed like teenagers at ourselves and others, sharing our most horrid and sublime thoughts. Harry taught me how to dress, how to cook leeks, stuffed cabbage, spinach and rice, and stuffed tomatoes. We played Casino on the screened porch in the summer and got under the covers and watched videos in the winter. We were family. He took me home to Queens to meet his wonderful parents, and I was treated to Athena’s excellent cooking and a theatrical display of Sophocles’ train set in the basement. He told my mother that she should appreciate me more. Harry was instrumental in guiding me through every career decision I made by balancing my sentiment with his practical approach to the world.

Sometimes his advice was so impossible it would even tickle him…like when I had difficult news to bring a friend about a play, and Harry said, “Just tell her it’s not to your tastes and then change the subject.”

This was his way, to tell the truth no matter the consequences. He handled his illness similarly. “I’m HIV too,” he said to me one day as if he were predicting rain. The first time he experienced the devastation in the waiting room of a doctor’s office specializing in AIDS, he reported back that he had swept through the room saying, “I have all the sympathy in the world for these people, but doctor, please, I’m just here for my collagen treatments.”

In 1992 he wrote a group of yet unpublished poems. One reads:

Let some softness come in
With the hot light and eternal buzz.
I may go deaf
Before I get to the door
I may lose my soul after all this ceaseless work.
I should never get to the door then
And my new existence might go elsewhere
With its new raincoat
And funny new feet.

Harry did go deaf at the end. And through all the difficulties and indignities, he remained tenacious in his longing for life. He read books with one eye, told pleasurable stories of his nephew Lucas, who he loved in the most unambivalent and unconditional way. He read cookbooks aloud in the hospital when he couldn’t even eat. He raged at the nurses and against the forces of this wretched disease. He was also full of love.

Near the end we discussed what life would be without him. He asked me to take some furniture for his room in the country. Already there were his beloved grandmother’s bedspread and vanity, and he had chosen for the walls an arresting cobalt blue. He wanted to be sure new items were placed exactly where he wanted them. Finally, I said, “Harry, are you planning to come back?” He slowly smiled in that devilish way that I loved so much and said, “Well, you’ll know when I do.”