Orin, a disenchanted librarian, arrives at his parents’ home for dinner to find that his sister, Sandy, left her husband, moved back home and began an affair with Mike, the next-door neighbor, and an old childhood friend Orin used to taunt. Mrs. Anderson, Mike’s mother, pops in and out of the action, constantly offering food and reminding Orin’s family that she still blames them for her other son’s death. Orin’s parents, Gerry and Dennis, return home, having forgotten they invited Orin for dinner. With everyone together, crazy accusations, witty retorts and hilarious remembrances fill the scenes. Into this melee comes Frieda, a foreign exchange student destined for Mrs. Anderson’s, but getting the wrong house. Frieda immediately falls for Orin, then takes over the gathering with her charm. To Orin she reveals she is actually the stand-in for the real exchange student and can change accents to prove it. Frieda’s ideas on love, and how it can heal situations like the one she stumbled into, become overpowering when she infuses a tea party with a magical love potion made from flowers. She then delivers her “love diatribe” on how to cure the ills between all her new friends. Challenging Orin and Sandy to follow her advice, they have no choice but to do as she asks when everyone who drinks the tea becomes unconscious. Orin and Sandy pour out love to their family and friends who wake up more refreshed than they have ever been. Underneath the farcical tone, the play is a provocative call to recognizing and using the healing power of love.

LOVE DIATRIBE was first produced in New York City by Circle Repertory Company (Tanya Berezin, artistic director) December 18, 1990. The production was directed by Jorge Cacheiro with sets by G. W. Mercier, costumes by Walter Hicklin, lighting by Dennis Parichy, and sound by Scott Lehrer. The production stage manager was Fred Reinglas. The cast, in order of appearance, was as follows:

LOVE DIATRIBE was also produced in Providence, RI, in 2005 on a double bill with THE FAIRY GARDEN. 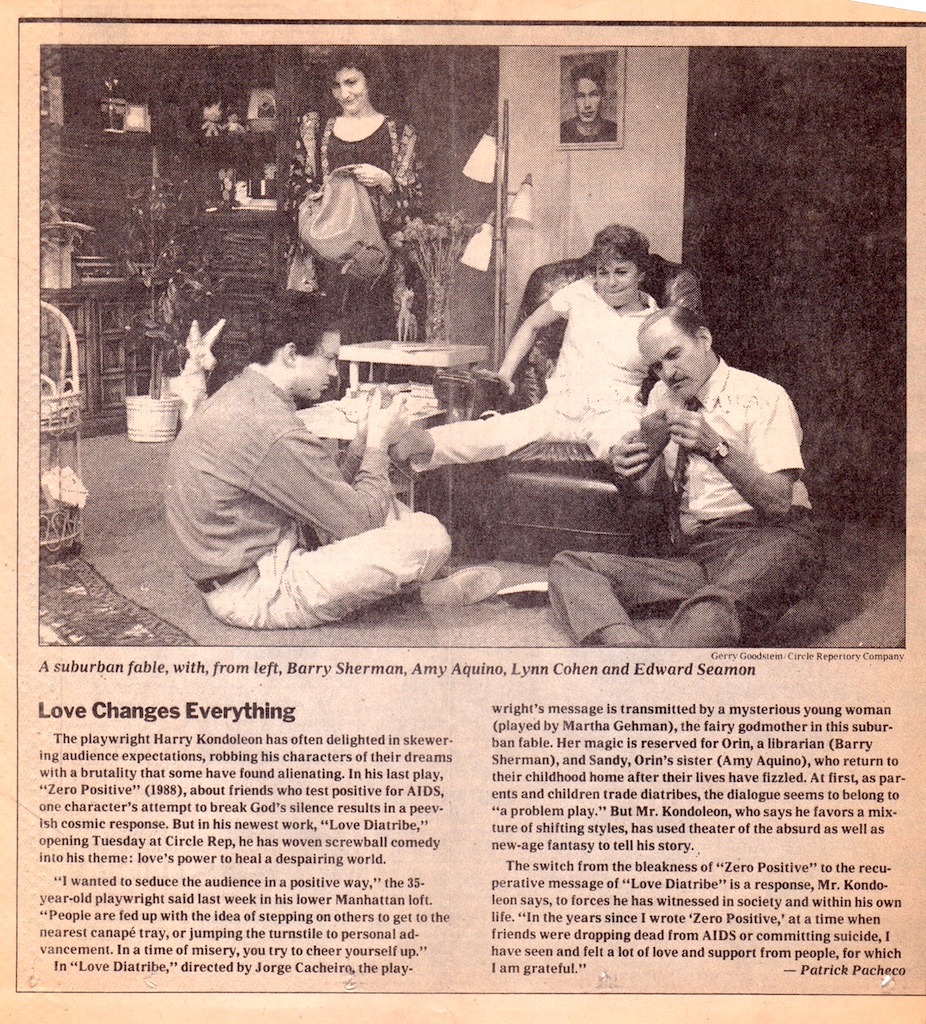 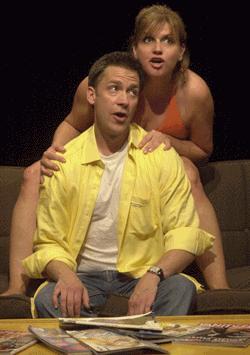 Wayne Kneeland and Rae Mancini in the Providence production