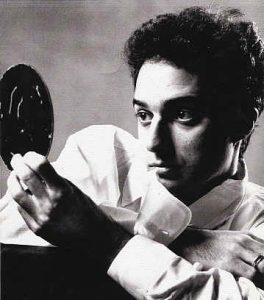 “I was too beautiful for public school. I had to be taken out. The other students would bite me. They couldn’t deal with undiluted beauty. Children are irrational. I’m an artist. I dip my fingers in poison and make beautiful things.”

“All art was created out of vengeance.”

Harry Kondoleon arrived on this planet in 1955 and started observing its inhabitants and their curious customs shortly thereafter. His parents were named Sophocles and Athena, though their friends in Queens called them Cliff and Tina. He shared a birthday with his two-years-older sister Christine. He spent a year in Bali where he saw witches dance and caught typhoid fever. He majored in cutthroat competition at the Yale School of Drama and for more than a decade studied heartbreak and rage with New York City’s daily newspaper critics. Traces of his life on Earth inevitably turned up in his plays: the eerie symbiosis of siblings, the ancient pleasure of putting on a show, the absurd realities of show business, the magic of delirium, the perversity of divine forces wearing masks as mundane as potato salad.

Yet much that goes on in the world of Kondoleon’s imagination escaped any explanation biography has to offer. His sneaky way, for instance, of writing comedies that begin in recognizable living rooms and then spiral imperceptibly into poetry — where does it come from? That, like the love his characters urgently seek, is a mystery that remains intact.

Kondoleon’s best-known plays include Christmas On Mars, The Vampires, Zero Positive, Slacks and Tops, The Fairy Garden, The Cote D’Azur Triangle, The Brides, Rococo, The Poets’ Corner, Anteroom, Play Yourself, Love Diatribe, The Houseguests, and Saved or Destroyed. His plays have been performed at theaters across the country and around the world, and they have earned him two Obie Awards, the Oppenheimer/Newsday Award, and a Drama-Logue Award. In addition, he has received Fulbright, Rockefeller, NEA, and Guggenheim fellowships.

Several of his plays were published by Theater Communications Group in an anthology entitled Self Torture and Strenuous Exercise. He is also the author of a volume of poetry, The Death of Understanding, and two novels, The Whore of Tjampuan and Diary of a Lost Boy. The latter was published by Alfred A. Knopf in 1994, two months before Harry Kondoleon died of complications from AIDS.